A story about the ironic inevitability of senseless violence in a society that embraces injustice and promotes those already wealthy and powerful.

Chronicle of a Death Foretold is a classic of Latin American literature and it belongs to the Magic Realism genre, genre that García Márquez, winner of the Nobel Prize in Literature in 1982, is the maximum exponent. It is a fascinating and fatalist story that tells the tales of accusations, mistakes, and prejudices that culminate in the premeditated killing of Santiago Nasar, the protagonist of this story. Gabriel García Márquez tells the story of a collective crime, because even thou two people physically committed the crime, the whole town was a witness, knew what was going to happen and did nothing to prevent it. This production of Chronicle, has been presented all over the world to rave reviews. The theater adaptation of the novel was originally directed by renowned Colombian director Jorge Alí Triana. 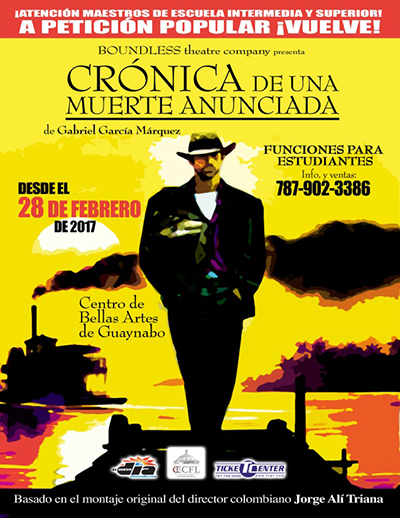