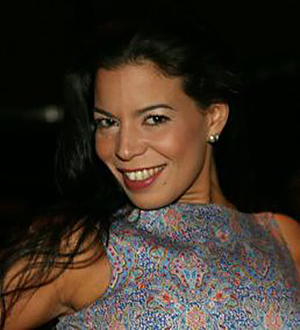 Studied at the University of Puerto Rico Drama Department, where she got her B.A. in Theatre Arts in 1998. She then went to London, U.K. where she trained at Arts Educational Schools London and received the One Year Advanced Certificate in Professional Acting and the National Advanced Certificate in Professional Acting awarded by Trinity College, (equivalent to an M.A.). She has also participated in Acting courses specializing in Shakespeare at the Royal Academy of Dramatic Arts (RADA).

In Puerto Rico, Salas has worked in many aspects of the theatrical world, such as Acting, directing, stage management, lighting design, and production in general. Throughout the years she has worked with important theatre companies such as Boundless Theatre Company, Inc., Tablado Puertorriqueño Inc., Antares Inc., Arlequín, Inc., Producciones Cinco Luces Inc., Escena Latina, Corporación Nosotros Mismos y El Timbre. Salas has also been a Theatre Professor at the Metropolitan University of Puerto Rico (UMET) since (2006).

As an actress, Salas has worked in social theatre plays, children’s musicals as well as commercial theatre. A few of these plays are Club de Solteros (Single’s Club) which premiered the Francisco Arriví Theatre. She received very good reviews for her characterization of Mori Vázquez, in Descalzos en San Juan, an adaptation of Neil Simon’s Barefoot in the Park. She has also appeared in El sueño y la vigilia ( Between Wakefulness and Dreams), in the comedy Sexos 101, and in the black comedy/ thriller La memoria del olvido (The Forgotten Memoire). With Boundless Theatre Company she participated in Chronicle of a Death Foretold by Gabriel García Márquez, staged and adapted by Jorge Alí Triana. For the screen, Salas worked in the Puertorican Film: La espera desespera (Hopeless Hopeful) and in the short films: Los Santos , and Vanidad.

As a director, Salas has been known for important theatre presentation such as …Gardel el Musical written by Eladio Cintrón. Her direction of this musical got her an ACE nomination in New York for Best Direction in the Musical Theatre category. De-Generación 80: Special Edition (From the 80’s Generation) and Trastos Viejos (Wretched Old Things), both written by Alexis S. Méndez. The staging of the theatrical version of Los Kakukómikos: The Return and Shakespeare’s The Merchant of Venice. For the School of the Arts of Carolina where she works as Artistic Director of the Musical Theatre Company she has staged versions of the Broadway Musicals: Cats, West Side Story, and Annie. For Boundless Theatre Company she directed the Staged Reading in New York of Five Kinds of Silence, the Puerto Rico Premiere of Five Kinds of Silence, and the Puerto Rico premiere of The Good Body.