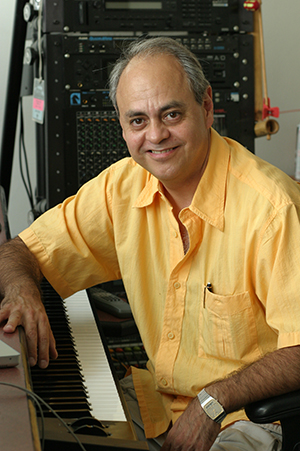 Born in Cali, Colombia. Jimmy Tanaka gave his first piano recital at the age of four. He went on to study at the Paris conservatory and the Bogota conservatory under the supervision of his mother Inés Nava, pianist herself and while in his teens, performed as a concert-pianist several times with the Colombia Symphony Orchestra and the Philrmonic Ordhestra of Cali. In Canada since 1968, he won the Senior Piano Award at the Saint John, New Brunswick Music Festival. Following two years of studies at Vincent d’Indy school of music, he began electric bass and percussion studies.

Along with other musical activities, he assumed the musical direction for Diane Dufresne, Robert Charlebois, Luc Plamondon’s Starmania, Anna Prucnal, Nancy Martínez and Nanette Workman as well as the production of the album “Chanteur de Pomme” by Raôul Duguay and “De l’autre côté de la pluie” by Gilles Rivard. He composed original pieces and produced several albums for saxophonist Justo Almario in Los Angeles, including “Plumbline”, a 1987 “Dove Award” nominee for best instrumental album of the year in Nashville, Tennessee.

During the summer 2000 “Canada Festivities”, he was the musical director for the circus “Çé la Fête” and in the last few years Jimmy diversified once again his career by programming the orchestral sequences for the Québec produced shows “Cinémashow”,“Génération Motown” and “Dalida, une vie” as well as creating and producing original music for Télé-Québec TV station’s productions, as well as award winning documentary films produced by the “National Film Board of Canada” and Argus Films in Montreal.